The Magic of Compost 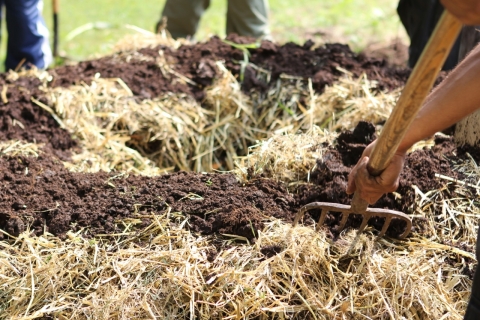 As a plant lover and analog forestry practitioner, compost for me is an evolving sacred and artful expression of air, warmth, moisture, and elements seen and unseen.   As compost makers, we can mimic and accelerate the way Nature cycles organic matter, provided to us by the seasonal ebbs and flows of plant life plus digested solids provided to us by the animal kingdom, which all coalesce into pulsing planetary plasma that births life in so many forms.

What nature accomplishes so effortlessly in the wild, we try to recreate at home with roughly equal amounts of ‘green’ and ‘brown’ material, by volume not by weight, in a mounded doughnut shape with healthy doses of water and air circulation. The combination seems to provide just about the right ratio of carbon to nitrogenous material to feed and shelter the microbe population at just the right pace to see a steady temperature rise of around 110-120 degrees F for 10 – 14 days.  While there are many elements to consider, plant available nitrogen is among them.  Our carbon to nitrogen ratio (C:N) when we start a compost pile is ideally around 40:1. Finished compost has a ratio ideally in the range of 12:1  — a healthy indicator of whether or not our compost has truly matured and is ready for enhancing aerobic microbial activities in our soils.

As a Soil Food Web Advisor and Analog Forestry practitioner, my passions are the stuff of soils.  Our collaborators in soils include bacteria, archaea, fungi, protozoa, nematodes, arthropods and more.  The bacterial group, alone is enormous – about a trillion tons of bacteria on the planet!  There are said to be a billion or so on the surface of your skin as you read this article!

As principal decomposers in the living cycles of compost, Fungi are living fertilizers.  According to Paul Stamets, renowned mycologist, we share over a third of our DNA with fungi.  At least 90% of all plants have an association with mycorrhizae. There are 100,000 strains of fungi (that’s a lot of fun guys) and, according to Teaming with Microbes, millions more may be discovered.  They mostly grow from spores into threadlike structures called hyphae. Masses of hyphae form mycelium and produce phenol oxidase – an enzyme that dissolves lignins (which bind plant cellulose) and strong chitin shells of insects and bones.  Their hyphae leave a subway system of microscopic tunnels for air and water flow; they’re also habitat and safe way zones for bacteria predated by larger protozoa. This giant web of life that feeds and houses and hosts this microbial soup finds its most vibrant expression in the humus found in ancient forests and in our compost.

Assimilating essential nutrients and trace minerals is key in the living soil cycles of humus-rich compost.  One that holds my intention, while making Biodynamic compost is Phosphorus (P). Turns out, that the particular impulse of fungi to find and transport phosphorus over long distances and deliver it synergistically to plant roots is truly remarkable. Phosphorus is primary in the formation of bones, sustains cell membranes and gives shape to the DNA and RNA in all living things.  In 2008, the price of phosphorus grew from $50 to $400 per ton. Scientists in Australia, Sweden, Canada and the Netherlands formed the Global Phosphorus Research Initiative – holding an international workshop in Linköping Sweden.

Biodynamic compost production includes organic cow and other manures along with the Biodynamic Compost Preparations, which work with holistic synergy in the body of compost.  It is interesting to note that (BD 507) Valerian holds a relationship with Phosphorous. Similarly, all of the Biodynamic Preparations and plants hold potent relationships with equally essential nutrients and elements and call us to plant them everywhere we garden and grow. Biodynamic agriculture together with other restoration agricultural practices such as Analog Forestry and Permaculture advocate closed loop systems with respect and awe for the ever evolving living cycles that regenerate vital nutrients from within the soils of living land organism, which feeds us.

What is photosynthetic biomass?

Posted On 11 December, 2014 ~ 0 Comments
Currently, when discussions of climate change mitigation discuss carbon capture by plants, the primary focus is on woody biomass. There is a newfound appreciation of…

Posted On 6 June, 2015 ~ 0 Comments
Analog forestry is a methodology that is highly applicable for smallholder tea farmers in Cameroon. CENDEP, an IAFN partner in Cameroon recently held a series…

News from the Baracoa Agroforestry Experimental Station in Cuba

Posted On 20 March, 2016 ~ 1 Comment
Restoration work at the Agroforestry Station of Baracoa focuses on recovering a 6 km strip of the Sabanilla River basin from the town of Paso…

Join the conversation on our online forum!